In 1933 the Trumpeter Swan was thought to be headed for extinction with only 70 known to exist. But a large Pacific  population was discovered in the Coper River area of Alaska. Swans from this population were used to carefully reintroduce the Trumpeter Swan across North America and in 2010 the population was estimated to be 46,000. This is a truly spectacular bird and a spectacular comeback story. The Trumpeter Swan is our largest waterfowl with a wingspan that may exceed 8 feet. These swans are still pretty rare in Ingham County. Most of the swans we see are large flocks of migrating Tundra Swans and the introduced and aggressive Mute Swan. In March we were lucky to have a pair visit us for a few days and hang out in the wetlands on the north west corner of Jolly and Hagadorn Roads. I was crossing my fingers and hoping they would stick around and nest, but they flew away. Here is a photo of them starting a sort of mating dance. I almost got the "classic" heart photo. Here us a DNR website where you can read more about Trumpeter Swans in Michigan. 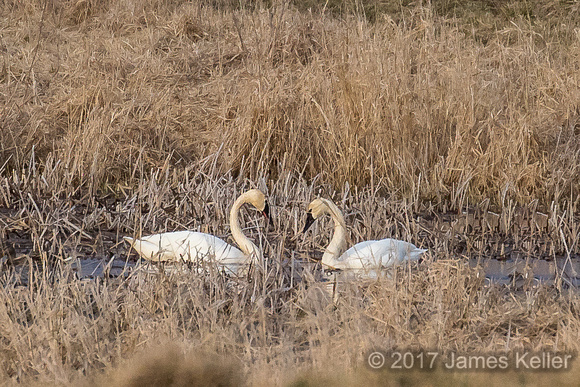